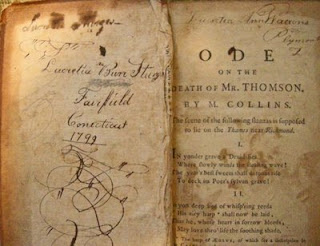 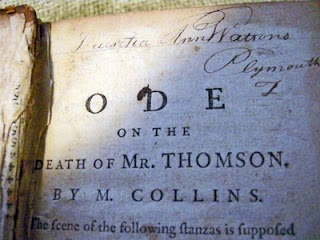 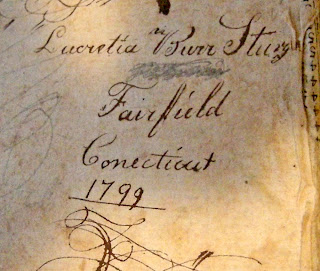 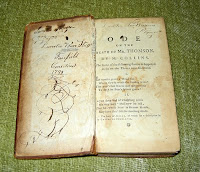 The romance surrounding my oldest earthly possession is palpable. It was found in the early 1980s by my uncle who was renting a historic house in Plymouth, Massachusetts. The house was a known 'hang out' for writers like Nathaniel Hawthorne and his contemporaries.
To heighten the romance further, the book was discovered in a 'secret' closet whose entrance had been concealed in such a way as to look like a wall. The irregularities of this wall were quite noticeable, and my uncle was curious. With permission from the homeowners, he carefully made an opening in the wall and discovered an antiquarian's fantasy: the closet was full of antique manuscripts and books dating from the mid 18th through the early 19th century!
The homeowners were generous enough to allow my uncle to keep several books from the stash. My uncle passed away about 8 years ago, and I inherited a good portion of his impressive library.
And the oldest is this one- "Ode on the Death of MR. Thomson" by M. Collins. I'm too ignorant of the subject to know if this is truly an esoteric piece of poetry, and I'm completely unacquainted with Mr. Thomson and M. Collins...nice fellows, I hope.

The inside cover of the book bears the following text (as far as I can decipher)in exquisitely fluid cursive:

1799
While the front page perversely declares the owner of the book to be "Lucretia Ann Watson" of Plymouth (Massachusetts?). It's probably safe to assume one name is pre-marital and the other post-marital.

I can't describe the awe I feel touching this volume that was touched, signed, and read by a woman who was probably already an adult 210 years ago! A woman whose physical body has been dust for nearly as long... And yet this small fragile object of cracked leather and yellowing paper is still bound, readable, and tangible.
I am forced to contemplate my own mortality.

OK, enough of my melodramatic musings on the transient quality of human life. Now to decide how to incorporate the story of this relic into a piece of narrative jewelry or painting. There's a challenge!
I'll just chalk that onto my list of New Year's resolutions.
Posted by Unknown at 2:38 PM