I resolve to make resolutions 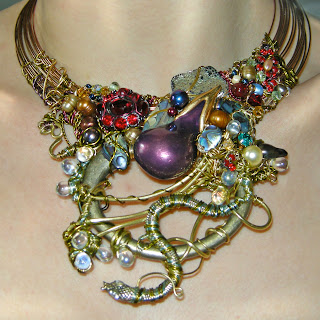 OK, so here's a draft-
Success! I've fulfilled my resolution by making a list of resolutions. Is that cheating? No, it's just playing with words.

And now for the second item- the time management one... The time I waste thinking about how long it would take to devise a time management template is itself a prime example of time mismanagement on my part.
However, the relationship between time-use and my jewelry making process is much more complex than simply aiming for 'efficiency'. Part of the magic of sculpting wearable art is, for me, the way a project evolves over the hours spent working on it. Granted, I am in control of how long I take to make anything. But there is, nonetheless, an intuitive voice that says 'keep going, keep going'.
Working in an isolated environment in the wee hours of the morning makes it easy to follow the intuitive voice while ignoring the sensible prodding of my brain's left hemisphere to'wrap things up and move on'.
I don't see myself ever becoming essentially pragmatic, but I am willing to adopt some logical parameters in my creative process. A few little tiny parameter.

A recent example of my choice to ignore my 'inner logician' is obvious in the necklace "La Belle Epoque Meets Klewism" . I thought I was finished with it and wore it several times, but that intuitive nagging never stopped until I incorporated the little wire 'snake' that was just sitting on my work table. That little nagging intuitive voice was right again I think.

So, I resolve to gain enough managerial practicality to do well in the world without smothering my inate propensity to take things 'over the top'. That's a start.

I'll think about the other resolutions later...
Posted by Unknown at 4:40 PM